Among many tourist attractions in our country, Whale watching industry has gathered pace during a short time of span. Now ranked as the best destination to see Blue Whales in the World, Mirissa Whale watching industry has grown into a reputed tourist attraction. Over 30 registered Whale watching boats operating in Mirissa area at present. One can see the enthusiasm of foreign tourists to venture into sea to have a closer look at these giant marine mammals, the largest living creatures in the World. On a daily basis, boat operators continue to take foreigners out to sea to offer them with the unique experience of sighting a Blue Whale. Some interesting facts about the Blue Whale are,

Blue Whales are more than 30 meters long and weight around 200 tons.

Their tongues alone can weigh as much as elephant.

There are less than 25,000 Blue Whales left in the entire World Oceans. 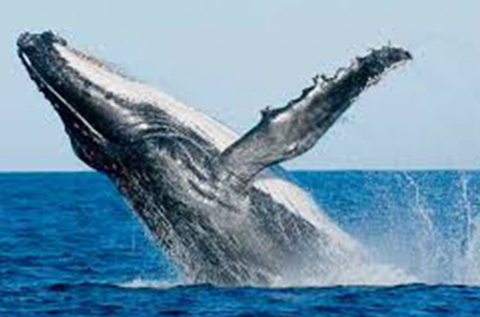 With the involvement of SLCG in monitoring Whale watching activities since September 2013, primary consideration has been given to safety aspects of people taking passage onboard Whale watching boats. In addition to the Coast Guard Inshore Patrol Craft two dedicated vessels are deployed to monitor activities out at sea as well as to assist boat operators during a emergency situations. The Coast Guard has conducted a number of programmes to educate boat operators on safety aspects and assisted in formulating a self-regulated code of conduct in order to make the Whale watching industry a sustainable one. Further, SLCG deployed two Inshore patrol Craft to monitor activities, specially to ensure “Best practices of whale watching” guidelines and also deployed two Safety Evacuation boats to ensure maximum protection of the tourists. Twenty seven local boat operators and their crew were trained on lifesaving and first aid techniques by SLCG Lifesaving instructors at their Training Center in Mirissa. The role played by the Coast Guard personnel have being praised by many local and foreign tourists who visit Mirissa fishery harbour for Whale watching. A couple of years ago, some people raised concerns over the conduct of local boat operators who are engaged in Whale watching and went onto label it as ‘Whale chasing’. Today, the situation has changed with the presence of Coast Guard who ensure that both the operators as well as the tourists are adhering to the regulations that are in place. The best testimony for the conduct of operators and the monitoring role, played by the Coast Guard comes from a foreigner who recent had an unforgettable experience while watching the giant Blue Whales off Mirissa. 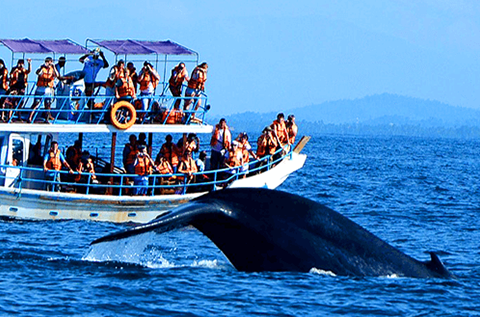 According to comments posted by Ms. Alyson on the ‘worldtravelfamily.com’, of her experience in the month of November in year 2013, she says that the Whale watching experience was very much ‘Whale friendly’ as the boat operators were adhering to rules and regulations such as maintaining the distance from the Whale, which is very important in enjoying the sight of a Whale without disturbing its natural environment.

She explains a situation where the Coast Guard boat acted promptly in responding to a boat with an outboard motor which almost ran over a Whale. The Coast Guard personnel later warned the operator and ensured that distance is maintained and rules are adhered (http://worldtravelfamily.com/blue-whale-whale-watching-mirissasri-lanka/).

This gives a very good message to the boat operators and the tourists around the world of the Whale watching standards practices in Mirissa, Sri Lanka. The role played by the SLCG in ensuring both operators and the tourists follow the stipulated rules/ regulations and importantly the on scene monitoring by Coast Guard craft can be seen as key factors in making Mirissa the best Whale watching destination in the World.